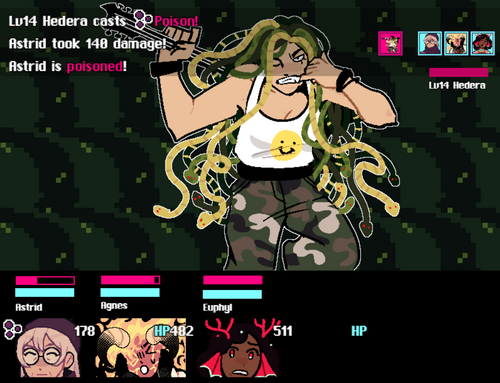 - Controls are on the splash screen before game

- MUSIC! Map music,smaller enemy music,boss music (except for Agnes and Lumen. I'm still mixing their tracks!),victory music,losing music.
(Tracks are little quiet right now compared to the sound effects but this will be fixed in the next update. You can turn down the SE volume in Options.)

- Enemies have a new pose just for attacks!

- Guarding now adds a buff to your defense and magic attack.

- More battle system changes! Not much has been changed in that department this update,but I want to go back to the drawing board and make things less static.

- *Possible* Sneak peek at some cutscenes. I want to keep them separate until the final release,but I might add some in early.

Get Astrid & The Witch

Get your favorite book back!